Longest driving day yet: 380 miles from Tulsa to Amarillo. Route 66 and associated roads much improved today. Still, I was surprised to see snow along the side of the roads all the way to the Texas-Oklahoma border. I hadn’t realized that last week’s snowstorm had extended so far south and west. 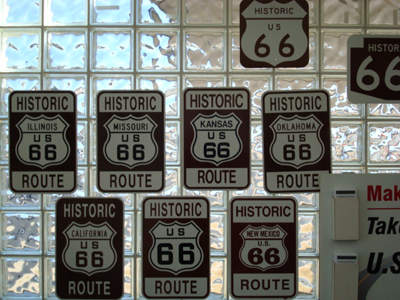 Beautiful to drive through the small towns that dot Route 66. Towns with names like Sapulpa, Chandler, Yukon (a sign indicated that it is the birthplace of Garth Brooks), Clinton, Elk City, and Erick (yet another sign proudly announcing it as the birthplace of Roger Miller).

As I entered the Texas Panhandle I noticed that the soil increasingly takes on a more reddish color. Also, much less ground cover (trees and bushes are disappearing as I head west).