I covered a lot of ground today—over 400 miles. Nearly all of it was on Route 25 North from Las Cruces, NM to Tucumcari, NM. The road was dry, the sun was bright, and the view of the mountains in the distance was spectacular. 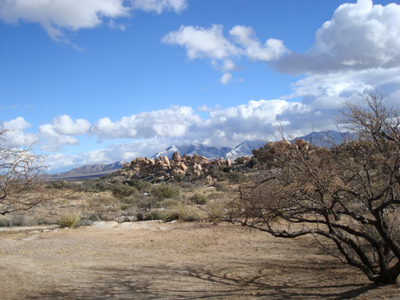 The only problem encountered today was the wind. The weather forecast this morning had called for sustained winds of 20-30 miles an hour, with gusts of 40-50 miles an hour. That seemed to be pretty accurate. The entire drive was spent with my holding a firm grip on the steering wheel as the winds buffeted my minivan. All along the way I saw signs that read: Gusty Winds May Exist. I passed one of these big metal signs with that message which was secured by just one bolt and was banging noisily against the metal pole on which it was precariously perched. That said more about the nature of the gusty winds than the words on the sign.