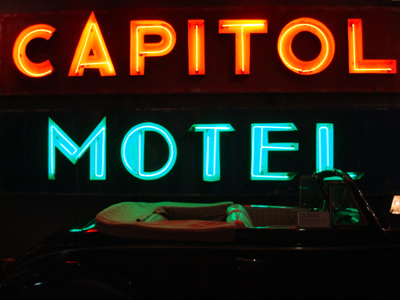 I have been making mental notes of some signs that I have seen along the way. The following come to mind for one reason or another.—

Paradise Motel
[Sign located above the most rundown and dismal-looking motel I’ve ever seen.]

Do not enter areas of smoke
[Given that there were no trees in sight, this sign was initially puzzling. Only later did I understand that it referred to the potential danger coming from prairie grass fires. It’s just not a sign I’m used to seeing in the eastern U.S.]

Tucumcari Tonite!
[Frequent signage stating this seen for nearly 100 miles leading to Tucumcari. Small-town marketing at its finest, I guess.]

Photo Enforcement Zone
[This sign, seen in a very picturesque stretch of road, initially had me thinking that it had something to do with the taking of photos (either discouraging or encouraging it, though no pull-off areas to do that). Later, I wondered if it had something to do with law enforcement and speeding, though I saw no signs of that, either. Still not sure what it means.]

Elevation 6,000 feet
[The highest I’ve ever been on four wheels!]