Writings & postings from Larry from his cross country 3-4 week journey.Larry will be traveling Route 66 from Chicago to Santa Monica (about 2,300 miles by car, one way). Please scroll down to see all blog postings. 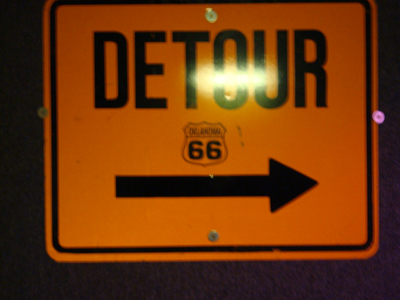 My journey today from Beaumont, California to Goodyear, Arizona was notable principally for its scenic vistas. The snowcapped mountains were simply beautiful reminders of the grandeur of nature. Also, rounding a turn I was amazed and began to laugh when I saw what appeared to be a thousand sleek, white windmills dotting the landscape. For as far as I could see, these modern windmill/energy generators appeared to me as some kind of windmill farm. The contrast between the mountains and windmills seemed, at first, incongruous to me. However, as I thought more about it, I began to see a certain kind of beauty in the idea of the natural mountains in a kind of harmonious relationship with these quiet energy generators. Having passed any number of oil wells and smoke-belching plants along Route 66, the idea of wind energy has great appeal. It is my hope that wind and solar energy may find greater purchase in our environmental landscape.

After dropping Warren off at his home I began my own return trip home at 4:00 p.m. I had hoped to make it as far as Indio, California but yet another round of heavy rain, heavy traffic, and heavy darkness prompted me to pull off of California Highway 60 East in the town of Beaumont, California. A mere 85 miles to start the return trip, but it’s a start.

Incidentally, the last four or five days have brought near record rainfall for California, and heavy snow (measured in feet, not inches) in the higher elevations of Arizona. The first round on Sunday/Monday prompted me to bypass the Grand Canyon due to road conditions. Then, checking the road conditions and weather forecast this afternoon, I decided to exercise caution and to not attempt navigating the icy roads to see the Grand Canyon. Nearly five feet of snow has fallen there in recent days, and the roads are said to be treacherous. While it’s a bit disappointing not to be able to visit the Grand Canyon on this trip, I feel it is the wiser choice. As such, I am taking a more southerly route for the next few days. I hope to make it as far as Tucson on Friday. 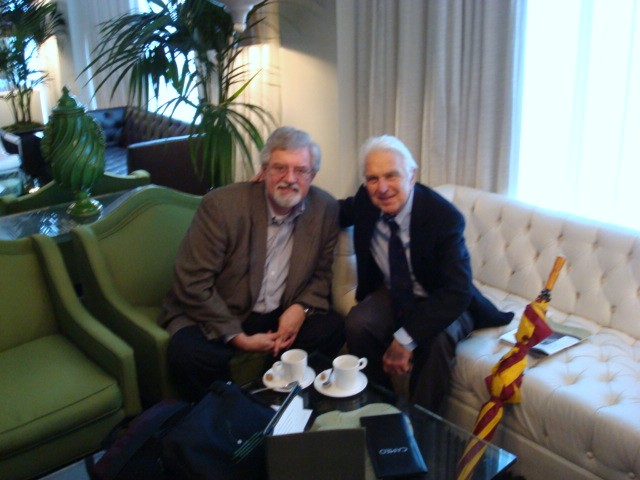 It was an incredibly difficult drive today. I left Barstow in heavy rain and it only got worse from there. Along the way I encountered driving rain, high winds, freezing rain, hail, and lightning. I saw two cars that had just collided on the icy hills out of Barstow. As if that wasn’t enough, I heard a loud explosion and something hit my car: A semi-truck that was in the lane next to me had a tire blowout and some of it hit the side of my car. Most of it appeared to hit the car that was driving behind it. I watched in my rearview mirror as the truck moved over several lanes to the right and pulled off the road. This leg of the journey was definitely a thrill-ride. All of it made for an unexpectedly exciting end to the westward terminus of my journey on Route 66.

I arrived at my hotel near the beach in Santa Monica and checked-in, feeling most grateful to have made it safely through the elements, and through my interesting two-week westward journey.

I had dinner with a friend who lives in Santa Monica, Roger Slifer. Roger and I went to Morristown High School together in the early 1970’s. We also worked together at that time at the Bluebird Restaurant in Morristown, Indiana where we earned $1.45 an hour as short order cooks. Roger lived in New York City for many years where he worked for both Marvel Comics and DC Comics as a comic book letterer and writer. Later, he moved to California, where he has worked in the animation industry as a scriptwriter. Looking back forty years to our days in Morristown, we were able to note with some satisfaction that each of us had chosen roads less travelled, and that over the past four decades those roads have led us to interesting and fulfilling lives.

Following a quiet and restful evening in Kingman, I loaded up the minivan yet again and headed off through several small towns including Oatman, AZ. Route 66 merged again with I-40 as I crossed the Colorado River on the bridge and entered California. A few miles into California, I came upon the required entry station into California. I wasn’t sure what to expect, and I did see an inspector going through the trunk of a car in the adjacent lane. When I pulled up, I was asked where I had come from, and whether I had any plants, produce or seeds in the car. I did not, and I was sent along my merry way.

I was amused to drive through Needles, California—largely because I have always been a major fan of Charles Shultz and his Peanuts comic strip. Shultz used to live in Needles and he made it the home of Snoopy’s Western cousin, Spike. Parts of the classic film, The Grapes of Wrath, had also been filmed in Needles.

The sky was getting dark and it started to rain as I entered the Mojave Desert portion of the trip. I decided to take the safer route and to stick mostly to I-40 through the desert. It started to rain heavily, and I began to wonder about things like flash floods and mudslides that I have read about taking place in the desert and hills. Thankfully, I didn’t see anything like that. It was still raining heavily when I pulled into the motel in Barstow for the evening.

While it had been my plan to drive today from Rio Verde to the Grand Canyon, the winter weather has forced me to defer that for now. The U.S. Weather department is predicting up to a foot of snow for the Flagstaff/Grand Canyon area. The road from Rio Verde to Flagstaff/Grand Canyon is a very steep climb as it goes from 2,000 to 8,000 feet in altitude. Bruce convinced me that there was sufficient cause for concern about my heading up there in this weather, and driving a minivan rather than a four wheel drive, and so I opted to head northwest to Kingman, where the precipitation I would encounter would be rain, rather than ice or snow.

Kingman, Arizona is the birthplace of character actor Andy Devine, and a street has been named for him. I had read that Clark Gable and Carole Lombard had been married in Kingman.